In order to solve a problem faster, work can sometimes be executed in parallel, as mentioned in Getting Started. To achieve this, one usually uses either a Shared Memory or a Distributed Memory programming model. Following is a short description of the basic concept of Shared Memory and Distributed Memory. Information on how to start/run/use an exisiting parallel code can be found in the OpenMP or MPI article. 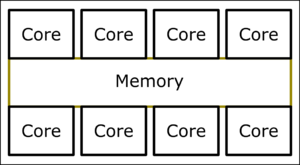 Shared Memory programming works like the communication via a pin board. There is one shared memory (pin-board in the analogy) where everybody can see what everybody is doing and how far they have gotten or which results (the bathroom is already clean) they got. Similar to the physical world, there are logistical limits on many people can use the memory (pin board) efficiently and how big it can be.

In the computer this translates to multiple cores having equal access to the same memory as depicted. This has the advantage, that there is generally very little communication overhead, since every core can write to every memory location and the communication is therefore implicit. Futhermore parallelising an existing sequential (= not parallel) program is commonly straight forward and very easy to implement, if the underlying problem allows parallelisation. As can be seen in the picture, it is not practical to attach more and more cores to the memory and therefore this paradigm is limited by how many cores you can fit into one computer (a few hundred are a good estimate).

This paradigm is implemented by e.g. Open Memory Programming (OpenMP). 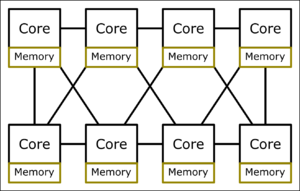 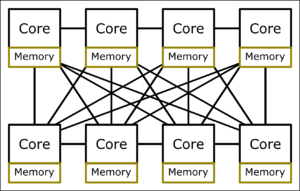 Distributed Memory is similar to the way how multiple humans interact with problems: every process 'works' on it's own and can communicate with the others by sending messages (talking and listening).

Since every communication is explicitly coded, this communication pattern can be designed carefully to exploit the architecture and the available nodes to the fullest extend. Therefore, theoretically, it can scale as high as the underlying problem allows, being only limited by the network connecting the nodes and the overhead of sending/receiving messages.

So in sum it really depends and if you are unsure, have a chat with your local HPC division, check out the example in the References and/or head over to the Support.