Every modern processor has support for so called hardware performance monitoring (HPM) units. To use HPM units dedicated profiling tools need to be used. HPM metrics give a very detailed view on software-hardware interaction and add almost no overhead. Every serious performance engineering effort should use a HPM tool for profiling. A very good overview about HPM capabilities of many X86 processor architectures is given in the Likwid Wiki.

There are two basic ways to use HPM units:

It is often difficult for software developers to choose the correct set of raw events to accurately measure the interesting high-level metrics. Most of those metrics cannot be directly measured, but require a set of raw events, from which derived metrics can be computed. Also processor vendors usually take no responsibility for wrong event counts. One has to trust the tool to choose the right event sets and employ validation of the results.

The Likwid tools provide the command line tool likwid-perfctr for measuring HPM events as well as other data sources as e.g. RAPL counters. likwid-perfctr supports all modern X86 architectures as well as early support for Power and ARM processors. It is only available for the Linux operating system. Because it performs end-to-end measurements it requires to pin the application to cores, affinity control is already built into the tool through. Some notable features are:

All recommended metrics can be measured using the MEM_DP/MEM_SP, BRANCH, DATA, L2 and L3 performance groups.

The Oracle Sampling Collector and the Performance analyzer are a pair of tools that can be used to collect and analyze performance data for serial or parallel applications.

Performance data including a hierarchy of function calls and hardware performance counters, for example, can be gathered by executing the program under control of the Sampling Collector:

This will create an experiment directory test.1.er (by default) which can then be examined using the Performance Analyzer:

More information can be found here.

Usage (hear with the `hpc-performance` target:

Every target supports so called knobs that allow to adjust the functionality. An overview about supported knobs for an analysis target is available with:

Help on using `amplxe-cl` with MPI is found here.

Score-P is an infrastructure supporting multiple other tools as backend. Targeted at large scale parallel measurements. More information can be found here.

The TAU Performance System is a portable profiling and tracing toolkit for performance analysis of parallel programs written in Fortran, C, C++, UPC, Java, Python. More infos can be found on the TAU webpage

HPCToolkit is an integrated suite of tools for measurement and analysis of program performance on computers ranging from multicore desktop systems to the largest supercomputers. More infos can be found on the HPCToolkit webpage.

In this section an analysis of the HPCG 3.0 reference code is shown to illustrate the benefit of HPM profiling. The High Performance Conjugate Gradients (HPCG) Benchmark project is an effort to accompany the instruction throughput limited Linpack benchmark with a memory bandwidth limited benchmark.

Benchmarking was performed on a standard Intel Ivy-Bridge EP cluster node running with 2.2GHz (2 sockets, 10 cores per socket). The frequency was pinned to the nominal frequency. The code was compiled using the Intel compiler tool chain version 17.0up03. Performance profiling was done using Likwid version 4.1.2.

As can be seen the pure MPI build was used. Application benchmarking was performed with affinity controlled using likwid-mpirun. HPCG uses a sparse CRS implementation for the smoother (this was revealed by static code analysis). The smoother (which is the dominating kernel in the runtime profile) has a read only dominated data access pattern. Therefore the results were compared to a sythetic load only benchmark.

The maximum sustained load bandwidth was measured using the following call to `likwid-bench`:

For benchmarking `likwid-mpirun` was used to ensure pinning of processes to cores. For e.g. 3 processes running on the first three cores of one sockets the following call may be used:

Next we plot bandwidth as reported by HPCG vs bandwidth measured with the synthetic load benchmark. 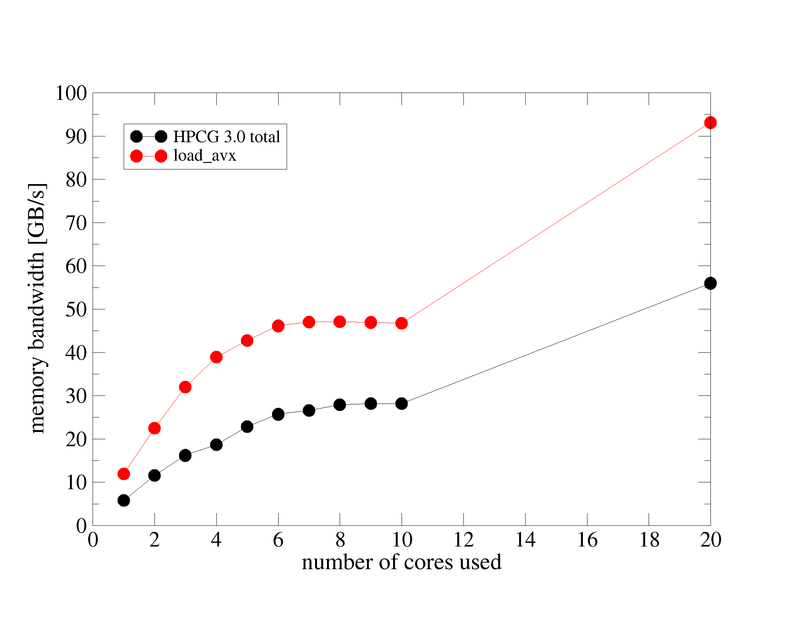 Scaling from one socket to two is linear as expected. Still HPCCG only reaches roughly half of the bandwidth measured with a AVX load only benchmark. Both curves show a saturating performance behavior, less pronounced for HPCG. HPCG should reach the same saturated memory bandwidth as the synthetic load benchmark. To be sure that the numbers reported by the benchmark are correct the SYMGS loop was instrumented using the LIKWID marker API to measure the bandwidth with hardware performance monitoring.

The following changes are made to the code (only changes shown):

The code was again executed using `likwid-mpirun` which can be used as a wrapper to likwid-perfctr. Measurement was performed using one process, the `-m` indicates that the code is instrumented and we use the MEM metric group.

The result is as follows:

The data volume is dominated by loads. Total memory bandwidth for single core execution is around 9 GB/s. This is significantly higher than the 5.8 GB/s reported by HPCG itself. This means that the benchmark does not see the full bandwidth. This is an indication that not all of the data transferred from main memory is also consumed. The suspicion is that the performance pattern Excess data volume applies.

If you search the internet one can find a paper on optimizing HPCG by IBM. They found out that the reference data allocation actually calls new for every single line of the matrix, and the allocated size is small (number of nonzeros per row). This may lead to more memory fragmentation and could explain the lower bandwidth observed by the benchmark itself. Memory fragmentation has two consequences. Because the memory hardware prefetcher gets in the data on a per 4k page granularity it may fetch more data than actually required. To confirm the suspicion of excess data volume I introduced a memory pool with a single `new` for the overall matrix and just set the pointers inside the pool for every line of the matrix.

The code in `./src/GenerateProblem_ref.cpp` changes from:

To prevent at a segvault the deallocation of memory for the array has to be commented out. The performance on one socket changes to 6 GFlops/s which is an increase of 38%. The bandwidth scaling now looks like the following: 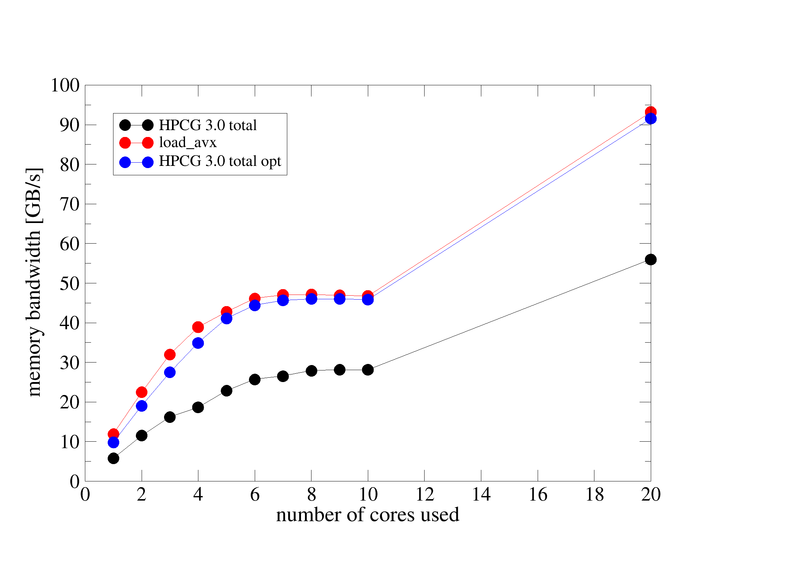 The memory data volume decreased from 484GB to 285GB. This confirms that indeed the benchmark was suffering from excess data volume. After the fix the performance pattern is now Bandwidth saturation. This example illustrates the interplay between static code review, application benchmarking and microbenchmarking as well as performance profiling. The fact that the memory bandwidth as experienced by the application is different from the actual memory bandwidth is very difficult to diagnose without a HPM tool. After the optimization the performance profile is used to confirm and quantify the effect of the optimization.