NUMA (short for nun-uniform memory access) is a memory architecture which is popular in HPC. A typical cluster consists of hundreds of nodes where each individual node is a NUMA-system. 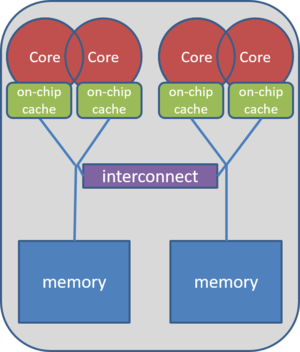 A sketch of the NUMA architecture showing the different sockets, their local memory and the interconnect

Without NUMA, there is only limited space which is close to the main memory. In NUMA systems, the main memory can be split into several parts. This allows more cores and overall more main memory. The last advantage is an inherent property of the design. As long as all cores only access local main memory, each socket can access its own main memory simultaneously with the same bandwidth.

Due to the more complex design of NUMA, there exist two pitfalls for a programmer which is unaware of the NUMA architecture. These pitfalls may result in code which does not scale well. Both are caused by a extensive usage of the interconnect, which may prove to be a huge bottleneck.

The first problem is thread migration. In general, the operating system is allowed to move threads (or processes) between cores if it detects that the cores have different workloads. This can improve load balancing but causes additional costs. However, this is usually not wanted on NUMA systems. The reason is that if a thread which works on data in the core's local main memory gets moved to a different socket, it will get separated from its data. This means that the migrated thread has to use the slow interconnect all the time. The solution to this problem is pinning.

The second problem is data placement. If the programmer allocates the memory unaware of the NUMA architecture, all threads which are located on non-local sockets have to use the interconnect. The solution is provided with the so-called first-touch policy. Since the operating system is aware of the NUMA architecture, it allocates the memory local to the threads which first "touched" the memory.

Assuming thread affinity (pinning) was defined correctly, the first loop will distribute the arrays a and b across the different parts of the main memory in a way that each thread participating is local to its own chunk of data. This way, the addition only requires to access local data.