This article describes the use of FastX as a flexible and simple remote desktop solution for remotely working with graphical programs and for schools and workshops to avoid operating-system-specific software and problems.

While command line based access to HPC systems is convenient for many use cases, there are many situations where a graphical remote desktop connections is required or convenient. For instance, Microsoft Windows has no native X-server support, which limits the usage of many tools, especially for debugging and performance analysis purpose. Even for users with Unix-based operating systems such a remote desktop session might be beneficial, because it is possible to reconnect to a session in case of a network interruption. Furthermore, it eases the organization and implementation of tutorials and workshops with hands-on sessions, because an intuitive and scalable access to the HPC system is possible.

FastX2 is one of the tools which enables remote desktop sessions for HPC clusters. One advantage of the tool is that you have the choice between a native desktop client or the access in a browser window. Although, the latter one does not achieve the performance of the native desktop client, it works pretty good in the situation of local workshops and tutorials. Here, no participant needs to install any additional software beside a web browser, which allows to start with the hands-on session immediately.

In order to avoid overloading the normal dialog systems, it is a good practice to provide dedicated nodes for the graphical remote sessions with stricter resource limitations (e.g., the physical memory or the available CPU cores). Furthermore, it is recommended to only support desktop environments like MATE and XFCE, because KDE as well as GNOME tend to consume many hardware resources and thus limit the user experiences as well as the scalability.

The floating licenses can be checked out from a license server. After the installation you can use the following command to print the current status:

For each user starting a new session, one license is checked out (even if the user has multiple sessions on different servers). Each checked out license has a lifetime of 3600 seconds. Since the license is required by the server only, users can download the client on the Starnet website.

The FastX2 desktop clients already work after this step: 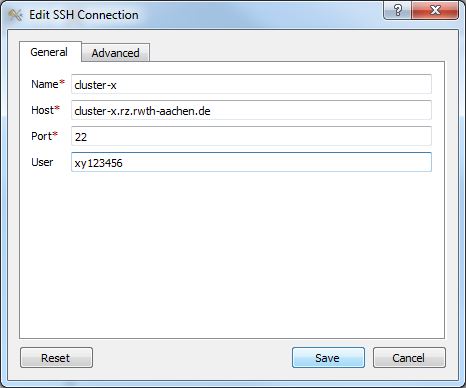 The fastx webserver is nodejs script which is running as user fastx. Usually, this user will be created by the installation script. However, this would mean that user and groups on different systems will get different UID/GIDs. Thus, it is a good practice to generate a global user and group via LDAP with unique UID/GID.

To install the webserver use the following command:

The browser addresses are:

In order to get access in a browser the firewall rules have to be modified (if necessary).

A self signed certificate can be generated by the following commands:

In order to restrict for TLSv1.2 or higher, add the following option to /usr/lib/fastx2/var/config/www.json (> RHEL 8):

After that you can use the web browser client: 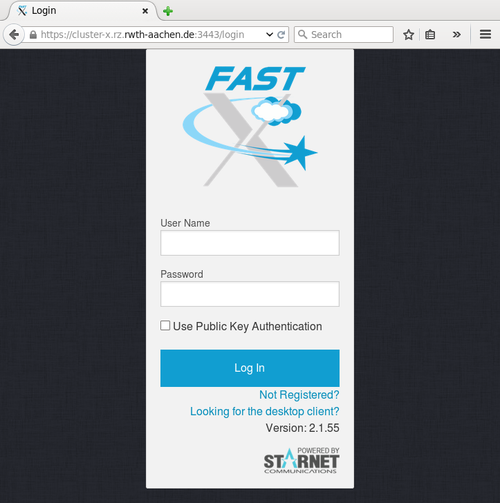 There are some issues with KDE: * Memory leak in kded4. * The processes krunner and plasma-desktop permanently use 100% CPU time.

In order to deactivate KDE you can use the following command:

If you install the Nvidia driver package on the system, there might be the following issue: * The Nvidia install script replaces some system libraries. As a consequence, OpenGL programs will not work with FastX sessions. In order to avoid this the following environment variables can be set:

You can still start FastX2 sessions, but OpenGL/GLX applications will not work anymore. In order to solve the problem you have to reinstall the FastX2 rpm after installing the Nvidia driver package.

In the CLAIX18 system in Aachen we have two dedicate nodes running the FastX server:

The nodes are equipped with two Intel Platinium 8160 processors and 384 GB of memory each. They are accessible through the browser (for security reasons only within the university network):

This link will be redirected to a SSL-secured connection on port 3443.