In order to collect performance data it is first recommended to compile the program with debug information using the -g flag. This ensures source line attribution and full functionality of the analyzer. Performance data can then be gathered by linking the program as usual and running it under the control of the Sampling Collector with the command:

Profile data is gathered every 10 milliseconds and written to the experiment file test.1.er by default. The filename number is automatically incremented on subsequent experiments. In fact the experiment file is an entire directory with a lot of information. In order to manipulate these it is recommended to use the provided utility commands er_mv, er_rm, er_cp to move, remove or copy these directories. This makes sure that time stamps are preserved, for example.

Many different kinds of performance data can be gathered by specifying the right options. To get a list of all available hardware counters just invoke the following command:

The available counters depends on the CPU (hardware) type of your node, with the same things being referenced by different names on different CPUs, sometimes. Number of counters which can be measured in a single application run is also dependent on the CPU type. Most of the times it is hardly possible to use more than 4 counters in the same measurement since some counters use the same resources and thus conflict with each other. The most important collect options are listed in the table below:

Some hardware counters available on a Skylake CPU that might be useful are listed in the table below:

The retired floating-point instructions can be used to calculate the FLOPS rate as follows:
Let

fp_arith_inst_retired.256b_packed_double.
Then the number of floating-point operations per time is given by

MPI programs can be sampled in two different ways:

In the first case an example command to start the sampling process could look like this:

Each MPI process writes its data into its own experiment directory test.*.er.
In the second case the sampling process can be started as follows:

All sampling data will be stored in a single "founder" experiment with "subexperiments" for each MPI process.

Note that running collect with a large numer of MPI processes may result in an overwhelming amount of experiment data. Hence, it is recommended to start the program with as few processes as possible.

After experiment data (e.g. test.1.er) has been obtained by the Sampling Collector it can be evaluated using the Oracle Performance Analyzer as follows:

The GUI offers different views. One of them is the call tree which shows in which order function calls happened during the execution of the program. An example call tree is shown in the image below: 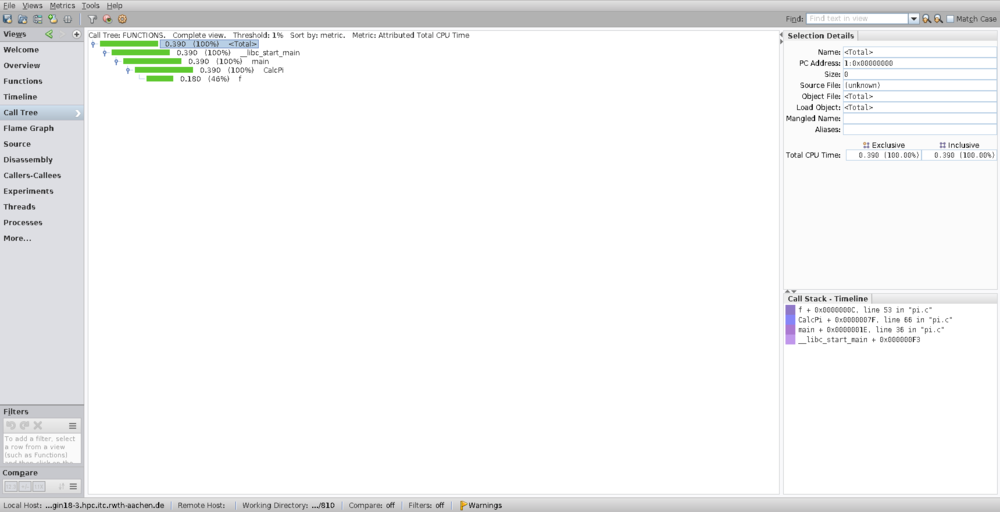 by numerical integration of the function f with

On the RWTH Cluster the Oracle Performance Analyzer must be loaded using the module system.

The Sampling Collector and the Performance Analyzer are part of the Oracle Developer Studio. To get an overview about the installed versions type:

Finally, you can load the Oracle Developer Studio by: